This is one of the gelatin-dry glass plate pictures of the relics and artifacts from Geonbongsa that the Joseon Governor General’s Office took in 1912. In the center of the picture is a seated gilt-bronze Buddha that was determined to have been the personal guardian Buddha of the master in an investigation conducted in 2006. 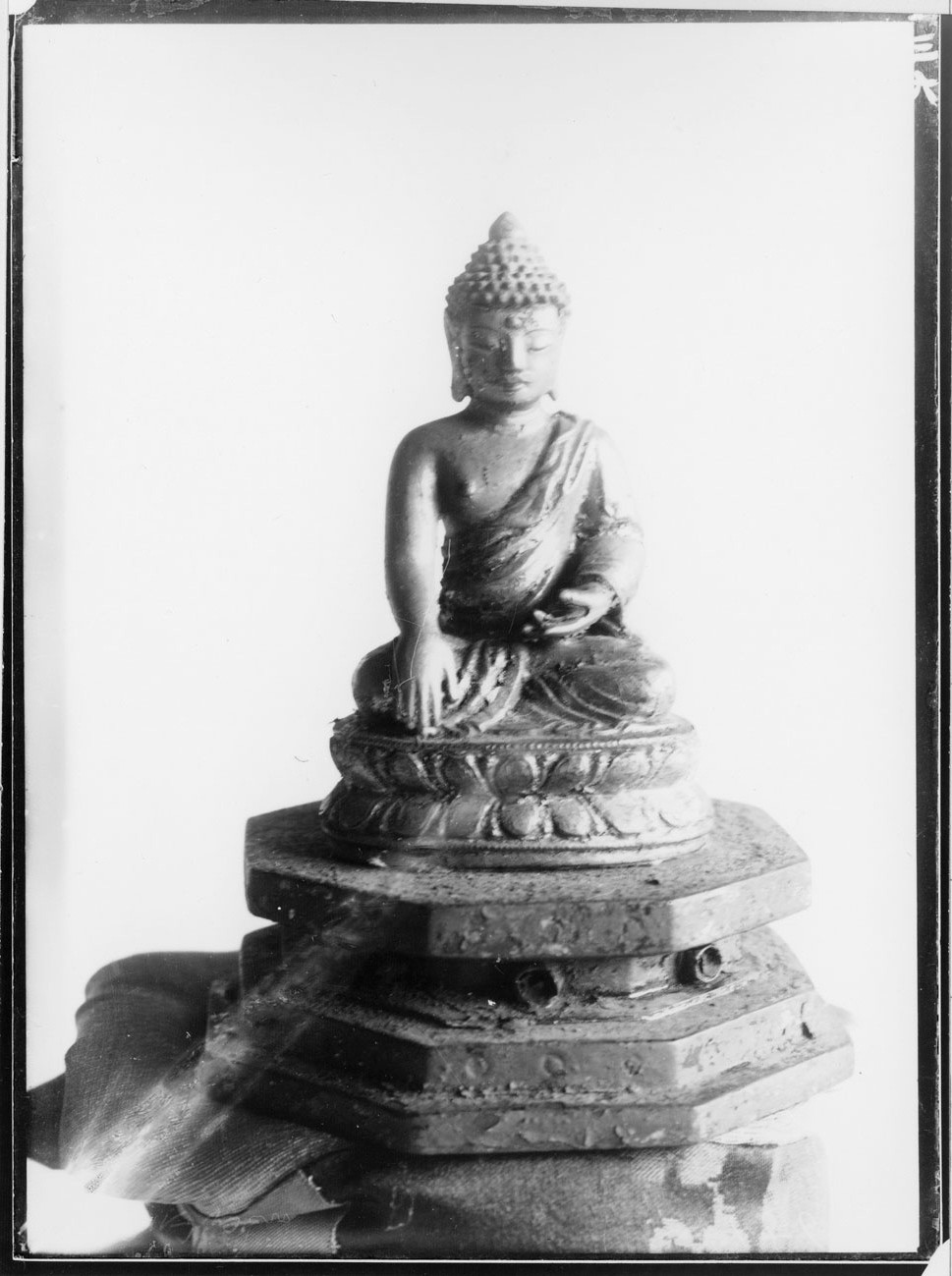 An inscription among the interred objects, bokjang (腹藏), in the statue reads, “your disciple Samyeong Yujeong reveres the teachings of Śākyamuni.” Thus, we know that Samyeong had a special relationship with the statute.

According to the records of the Geongbongsa written in 1882, the temple, located on Mt. Geumgangsan, is the place where the master took the tonsure, pravrajana, becoming a monk. The records also tell that the relics of Yujeong including his portrait, personal Buddha, robes, and mala prayer beads were all preserved at the temple. This explains why Katō Kiyomasa addressed Yujeong as the monk from Mt. Geumgangsan.

The words jangsam (長衫) and kasa (袈裟) refer to the clothing of a Buddhist monk. These robes are highly regarded for their historical value as they accurately identify the wearer as Sa'myeong. They are also valuable because regulations for monks in the mid-Joseon period have seldom been preserved. They allow us to understand the garments worn by an imminent monk in the mid-Joseon period.

Master Samyeong's jangsam is made of white cotton cloth (po 布) , about 35cm in width and the top and bottom portions are attached, forming an outer robe. The jangsam was worn by monks along with their dharma robes. The exact origin of the custom of wearing a jangsam is unknown. In the existing portraits, jangsam appear in various colors, including blue, brown, and white, but this, the jangsam of Samyeong, is the only extant example of this type of garment.

This dharma robe kasa is said to have been bestowed by King Seonjo (宣祖, 1552-1608, r. 1567-1608) on Master Samyeong in recognition of his contributions during the Imjin War. The original color is no longer discernible because of the extensive natural deterioration, and it is now separated into two parts. It is thought to have been a “great robe” made of 25 fabric panels. This robe was originally known as "Master Samyeong’s Golden Dharma Robe," but since pale red fabric is found on the inside of the robe, we can surmise that it was originally a red-colored robe.

Details: Flower and treasure patterns embroidered on the robe. 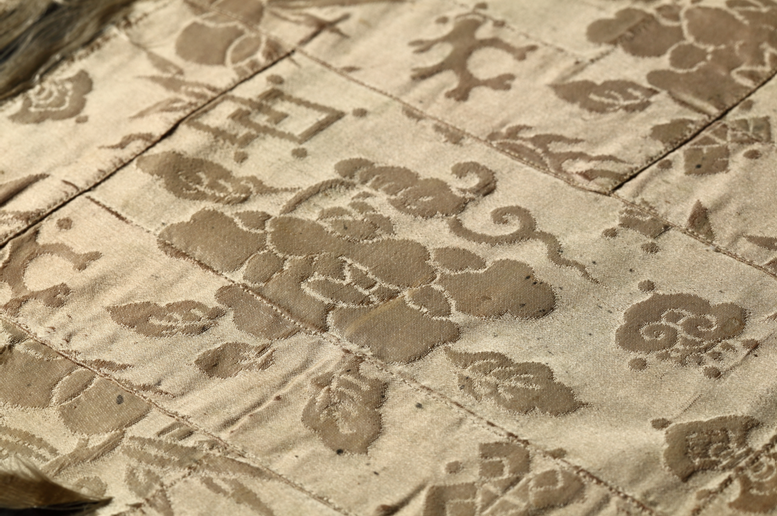 The flower pattern (花文) hwamun consists of plum and peony blossoms and the treasure pattern (宝文) bomun consists of eight kinds of treasure also known as the varied treasures (雜寶) japbo, derived from Buddhism or Taoism. These include coral, seo-bo treasures of books, cintāmaṇi jewels, axe-shaped implements, Chinese coins, gold lozenge-shaped decorations, rhinoceros horn, and flame-shaped ornaments. Even from this fragment of the robe, you can observe its beauty and delicacy.

Originally, the center of a dharma robe kasa robe featured images of the sun and moon, and during the Joseon dynasty, the Four Heavenly Kings were placed on each corner, but those elements have been lost from the robe of Master Sa'myeong.

Click here to see Kato Kiyomasa's artifact
More
Back
Back