Joseon envoys dispatched to Japan personally engaged with regional culture and interacted with local intellectuals. They received a warm welcome throughout Japan and locals actively sought them out to exchange skills and information. Extant writing and paintings provide insight into these meetings between envoys and Japanese intellectuals.

Sung Daejung (成大中, 1732-1809) personally commissioned this painting from the Japanese painter Kimura Kenkado in association with the Gyemi Voyage (癸未使行) of 1763. This example of a Japanese painting delivered to Joseon during a diplomatic envoy, reveals the close personal relationships between Korean and Japanese people at the time.

Shall we take a closer look at each part? 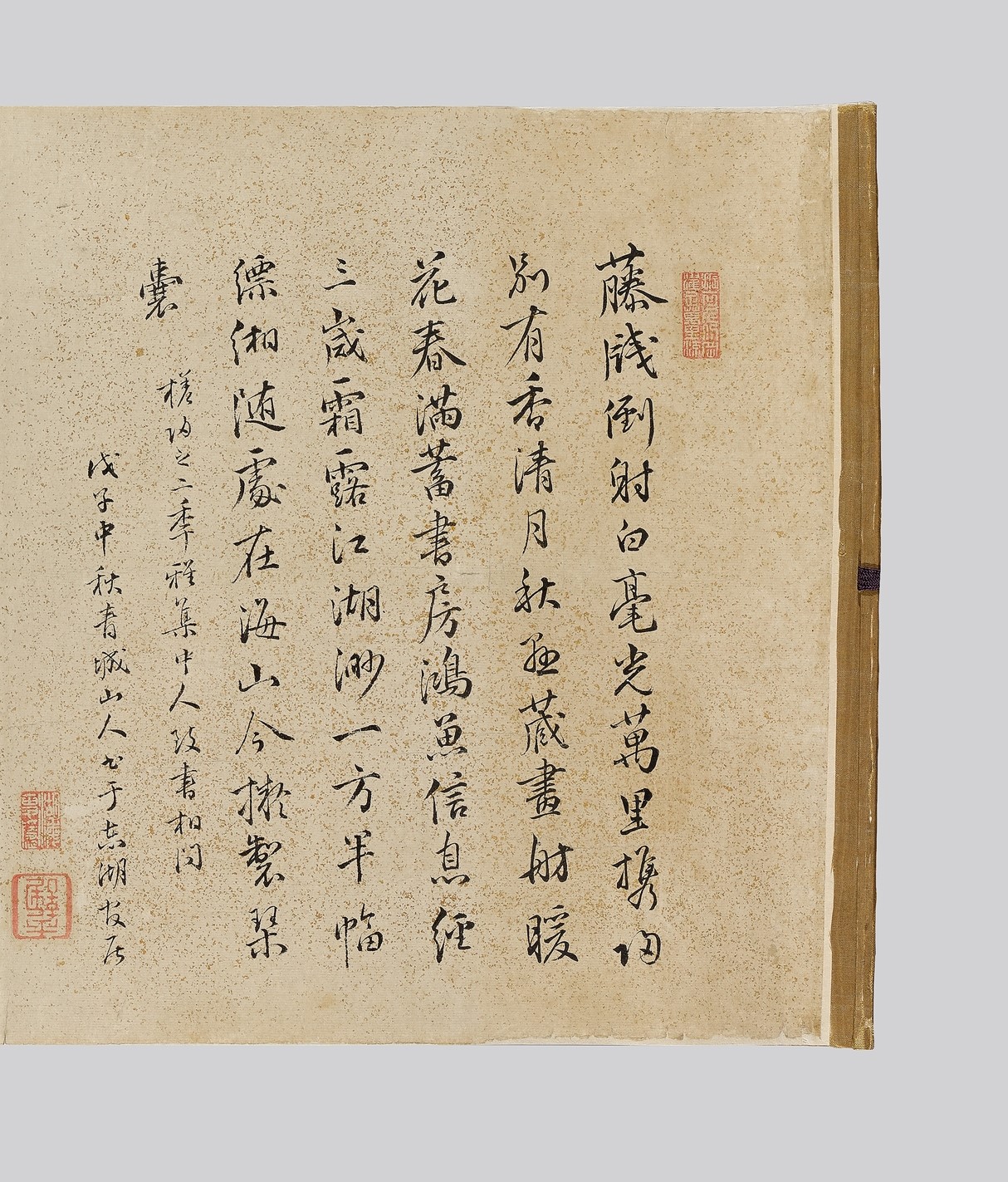 An Elegant Gathering at Kenkadō includes an introductory poem in metric heptameter (seven metrical feet per line) written by Sung Daejung. In the poem, Sung recalls how one of the members of the gathering party sent him a letter a full two years after they had briefly met each other when he participated in an official envoy to Japan.

藤箋倒射白毫光 On a piece of rattan paper, the light of Buddha's Urna shines upside down.
萬里携歸別有香 Brought from far away, how unique is the scent.
淸月秋懸藏畫舫 The pure Autumn moon follows the ship that carries the painting,
暖花春滿蓄書房 Fresh spring blossoms fill up my library.
鴻魚信息經三歲 The letter has come after the three years have gone,
霜露江湖渺一方 Yet the land of Edo with frost and dewdrops is still far away.
半幅縹緗隨處在 Carrying this painting together with me everywhere I go,
海山今擬製琴囊 Now, I could pack up my Geomungo and depart over the mountains and sea.

Two years after I travelled to Japan on an official envoy,

One of the members of the elegant gathering sent his regards in a letter.

Written at the official residence at East Lake by Sung Daejung, in the eighth month of 1768.

The poem speaks to the close friendship between Sung and his Japanese acquaintance, who look back fondly on their brief meeting during an official Joseon envoy to Japan a full two years earlier.

To the left of the poem by Sung Daejung,

an inscription written by the Kyoto-based monk Daiten titled An Elegant Gathering at Kenkadō (蒹葭雅集之圖) records the meeting in detail. 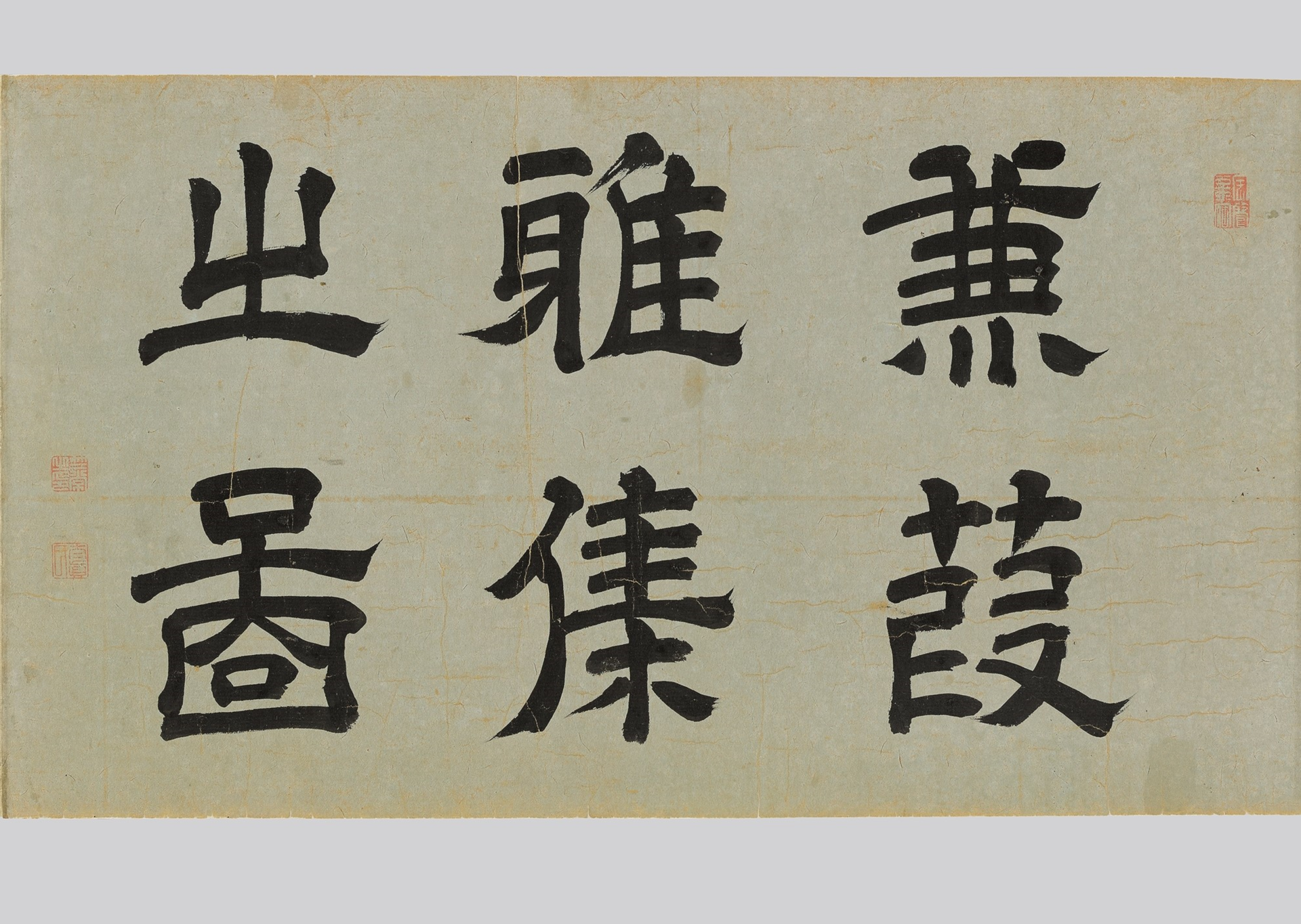 Sung Daejung met with the merchant and scholar Kimura Kenkadō and his associates several times during his stay in Osaka.

Kenkadō produced the painting at Sung’s request and elicited inscriptions from his fellow writers.

In the painting, Kimura Kenkadō and his friends are shown participating in an elegant gathering of noble literati known in Korean as an ahoe (雅會) at a library in Kenkadō hall. Blossoming trees in the surrounding landscape give the impression of a warm spring day.

Some figures are already gathered inside the library engaging in calligraphy, while other guests are still making their way through the garden. Also in the garden, a young servant boils tea for the participants.

Behind the library, the artist depicts the roof-tops of village houses appearing out of the mist and a background landscape of mountains and rivers with sailboats floating downstream.

Sung Daejung treasured An Elegant Gathering at Kenkadō and conveyed the story of the gathering to his fellow Joseon scholars as well as his descendants. The production and reception of this painting and accompanying records reveal how literati from both Japan and Korea deeply valued communication and relationships with each other during this period.

In addition to An Elegant Gathering at Kenkadō,

several other artworks reflect this kind of harmonious cultural exchange between Koreans and Japanese in the late Joseon period.

In the early Edo Period, the Tokugawa Shogunate promoted Confucianism within Japanese society. As part of this effort, the scholar Hayashi Razan (林羅山)  commissioned Kano Sansetsu to produce this portrait of Confucius for a Confucian ritual known as sekiten*.

*Sekiten (釈奠): A ritual to make an offering to Confucius and his students with food and drink.

Although, the painting was completed by a Japanese artist, the inscription to the right of the title identifying Confucius was written by a Korean. According to a record at the bottom right of the painting, this inscription was executed by the Joseon envoy Kim Seryum during a diplomatic mission to Japan a full four years after the painting was completed. This example of a collaborative artwork speaks to the strong personal and cultural ties between Korea and Japan.

This portrait by the Edo court painter Kano Tsunenobu represents the Korean scholar Jo Tae’eok who served as the main envoy in the 1711 embassy to Japan. In the painting, Jo Tae’eok appears in a blue robe sitting with his hands together on his lap and gazing out to the left. The inscription and seal at the bottom left identify Kano Tsunenobu as the artist.

Stylistically, the painting is quite different from Joseon portraits of the same period. The Japanese artist uses characteristic soft and gentle brushstrokes and modulates between thick and thin lines particularly in the description of fabric creases. In addition, the muddled treatment of the official rank badge sewn into the front of Jo Tae’eok’s robe indicates a lack of familiarity with the specifics of Joseon customs.