The Kyushu National Museum (九州国立博物館) located in Dazaifu (太宰府市) near Fukuoka (福岡縣) opened in 2005 becoming the fourth national museum of Japan. Located in the western part of the Japanese archipelago, Kyushu is close to the continent. Thus, human and material exchanges flourished in Kyushu since ancient times thanks to this geographical advantage. In particular, there was a Government Office, called Daizaifu (大宰府政廳), which welcomed foreign envoys in ancient times. Given this historical backgrounds, the Kyushu National Museum was established in Dazaifu, Fukuoka Prefecture, to explore Kyushu's culture in relation to East Asian.

There are 189 objects among the 125 different works of Korean art in the Kyushu National Museum collection. However, there is no separate Korean Gallery in the museum, which is the reason why Korean artifacts are displayed in the permanent exhibition room with objects from many other Asian countries. Therefore, in this section, we would like to introduce Korean works in the Kyushu National Museum from the realm of Buddhist Art. 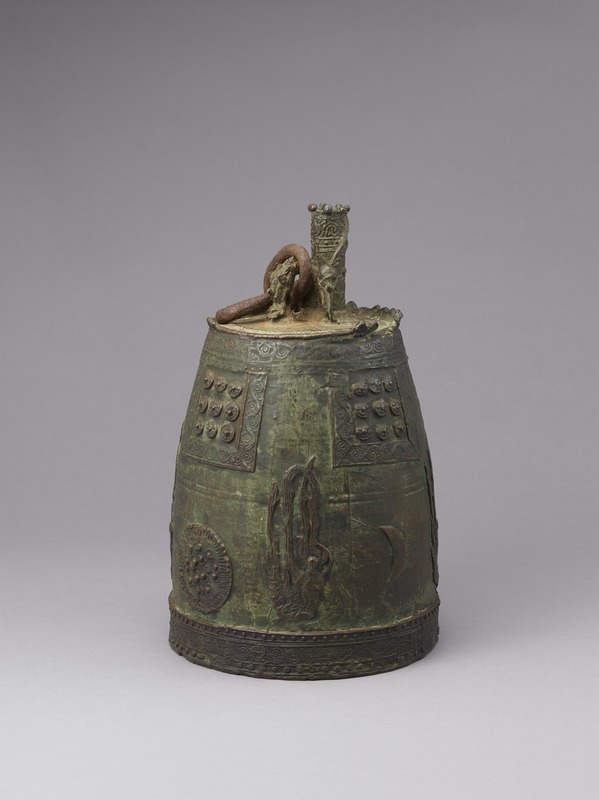 This bronze bell has a cylindrical body topped by a rounded sound tube and a dragon loop. On the body is an inscription with the date “6th year of Cheng’an (承安)” , an era name of the Chinese Jin dynasty, corresponding to the year 1201, as well as images of heavenly beings and the moon. Next to the dragon-shaped suspension loop (龍鈕), is the sound tube, which has the form of two inter-connected dragons in high relief cast into the upper part. There are four flying celestial beings at the bottom of the bell, two lotus-shaped strike plates between the celestial beings, and a crescent moon and inscriptions in the other sections. These characteristics are typical of bronze bells of the Unified Silla dynasty (統一新羅, 676–935) to which new elements from the Goryeo period have been added. According to the Kyushu National Museum records, the bell had been preserved by the Itō family (伊東家), lords of Obi domain (飫肥藩), in Hyūga province (日向國), currently Nichinan City (日南市), Miyazaki Prefecture. 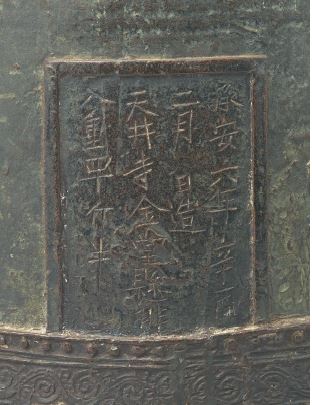 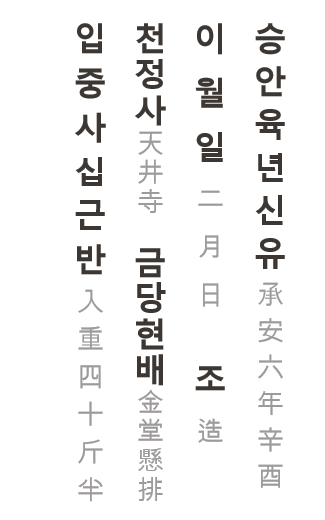 * The term geun is a measurement unit for weight used in premodern Korea. 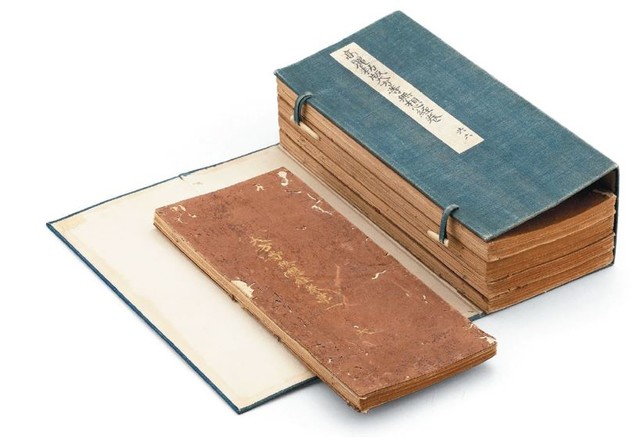 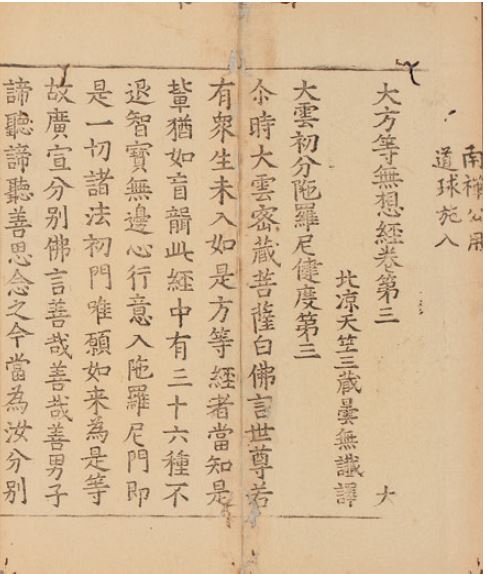 End Part of Mahāmegha Sūtra vol. 3, written Gyemyo-se, made by the Tripiṭaka Office of the Empire of Goryeo under the Edict of the Emperor 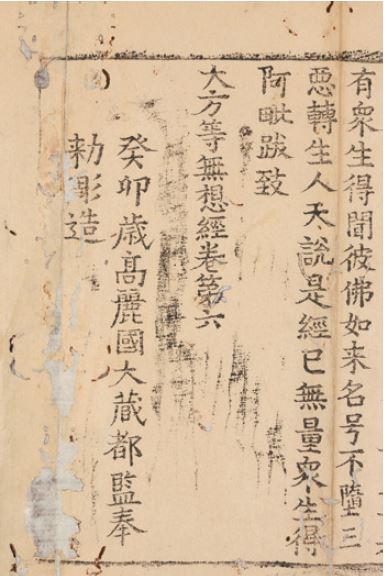 The Mahamegha Sūtra was translated into Chinese by Dharmakṣema (曇無讖) during Northern Liang dynasty (北梁, 385~433/439). The sutra preaches that the Buddha exists beyond time and never dies, and that all human beings can become buddhas. At the end of each volume is written  "Gyemyo-se (癸卯歲), made by the Tripiṭaka Office of the Empire of Goryeo under the Edict of the Emperor.” This inscription indicates that the compilation and publication of the sutra was made in the Gyemyo water-rabbit year 1243, under an edict of the emperor. 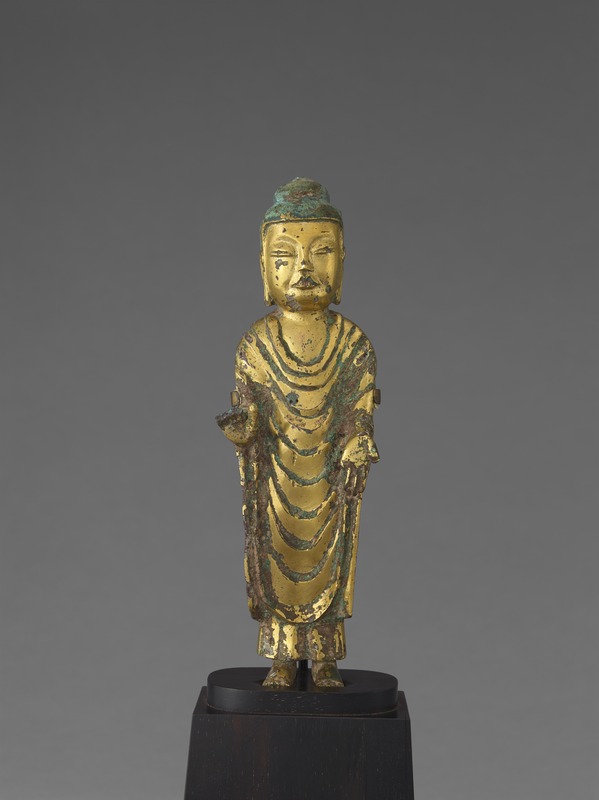 The Statue has relatively big head and hands, while the lower half of the body is slender, and the feet are small. The proportions are imperfect, but the expression of simple and bold lines creates a strong impression. The robe is in the style that covers both shoulders and flows downwards, hanging from shoulders to knees. It is presumed to have been produced during the Unified Silla period based on the strong sense of volume and rigid facial expression as well as the way the robe is worn with its curves and creases. 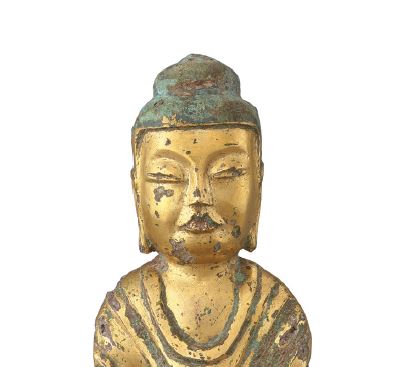 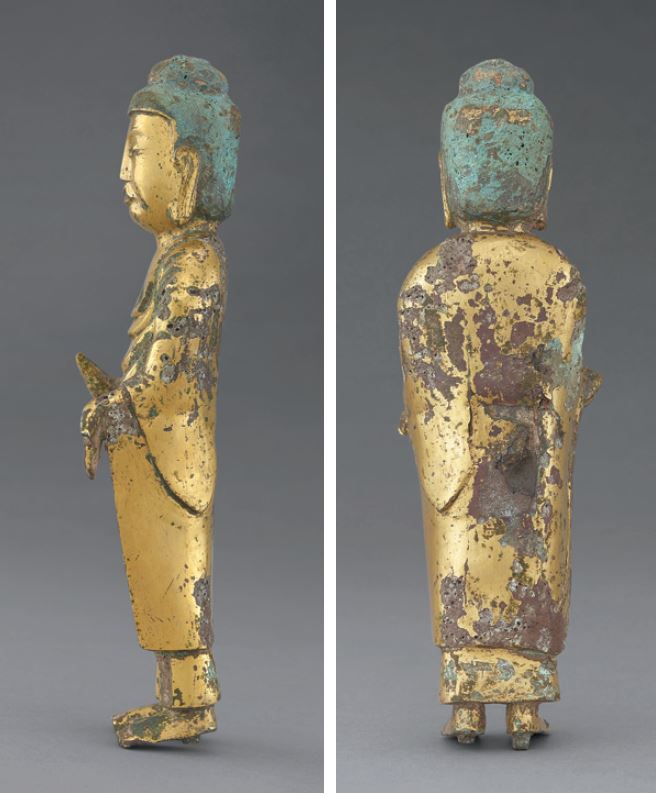 Kṣitigarbha Bodhisattva Seated in the Pose of Royal Ease (金銅地藏菩薩遊戱坐像) 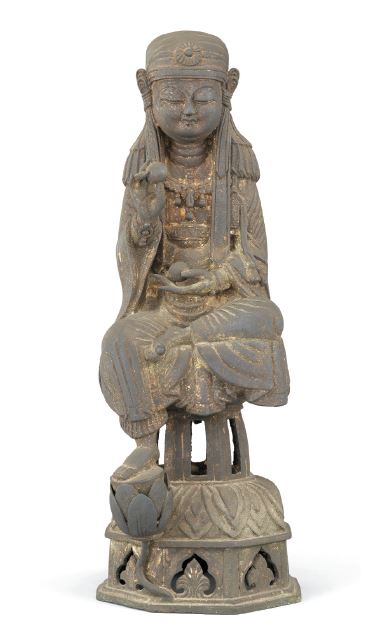 This statue of Kṣitigarbha Bodhisattva wears a headscarf and holds a jewel with both hands. The pose is called the lalitasana (遊戱坐) in Sanskrit.  Called “royal ease” in English, the pose involves a figure sitting on a throne with one leg tucked inwards on the seat and the other hanging down. The lalitasana pose is rarely found in Kṣitigarbha statues. In the back part of the statue, there are traces of gilding remain and a bronze tip for jointing the halo to the body. Another feature is that the face, neck, hands, and feet have curved surfaces that feel elastic, while the creases of robe are flat and formalized, demonstrating a large gap in the manner of representation. Based on these characteristics, we can estimate that it was probably produced in the late Goryeo or early Joseon periods. 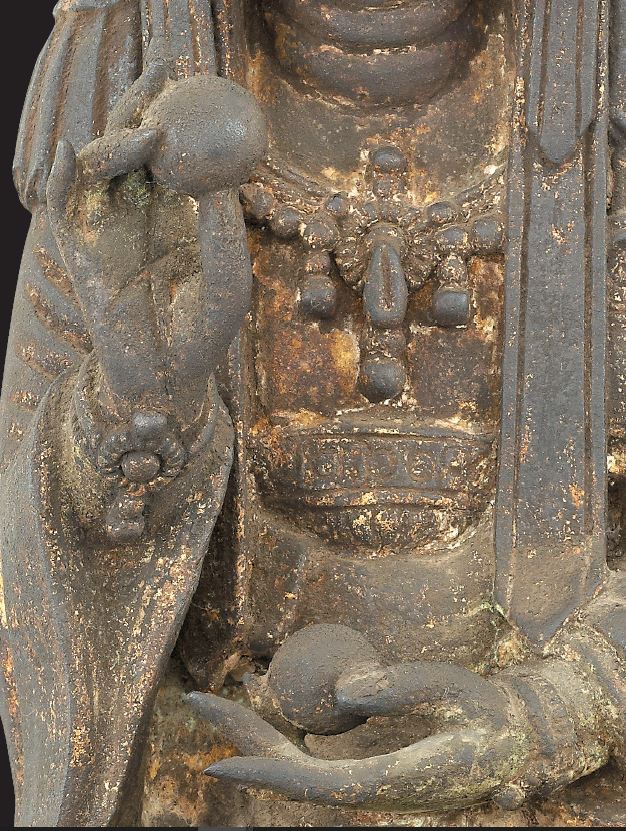 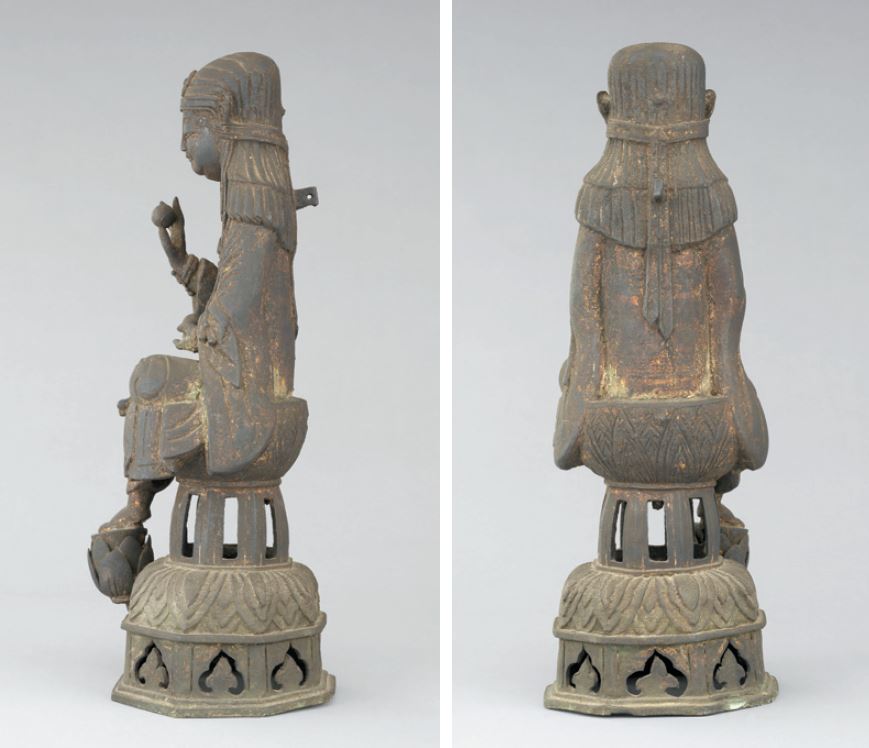 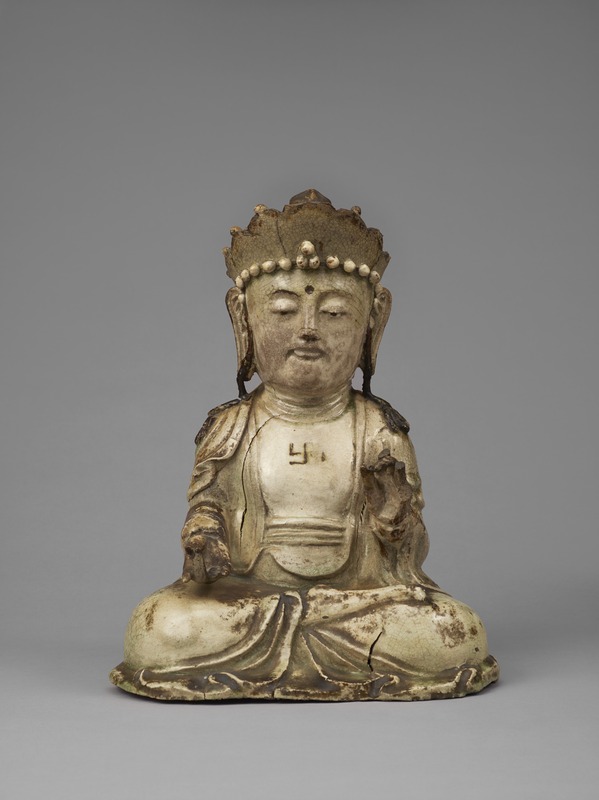 This is a statue of a seated bodhisattva. It is a ceramic piece made of clay, then coated with glaze and finally fired. The bodhisattva forms the vitarka-mudrā, a symbolic gestured used when preaching. Cracks, which were probably occurred during firing, are found on the upper body, legs, and the bottom. The fingers on both hands are missing, but the statue is relatively well preserved overall. The bodhisattva wears a mountain-shaped ornamental crown, and a large jewel is attached to the bottom of the crown. 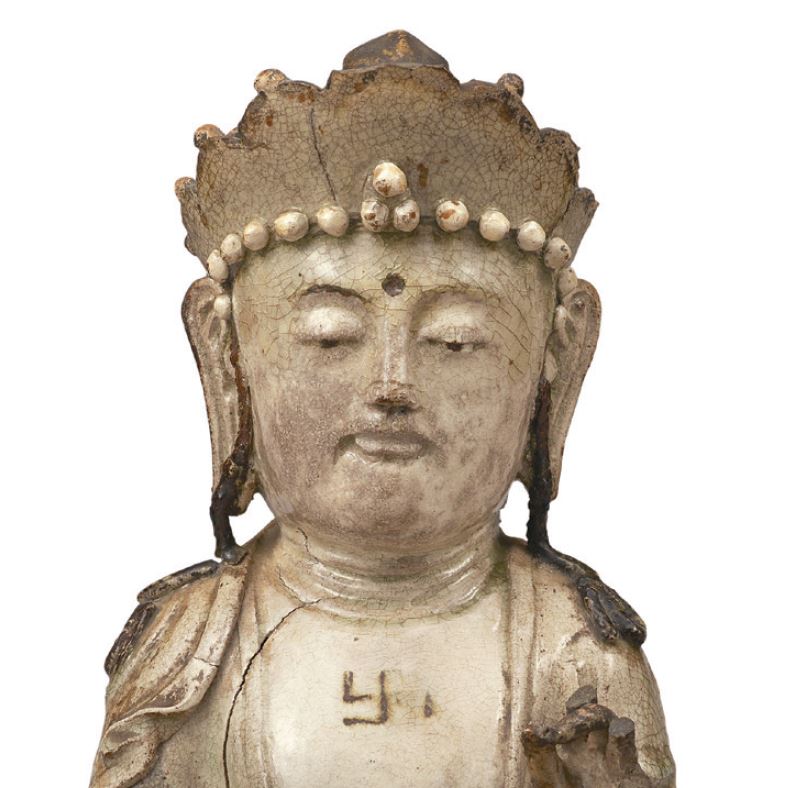 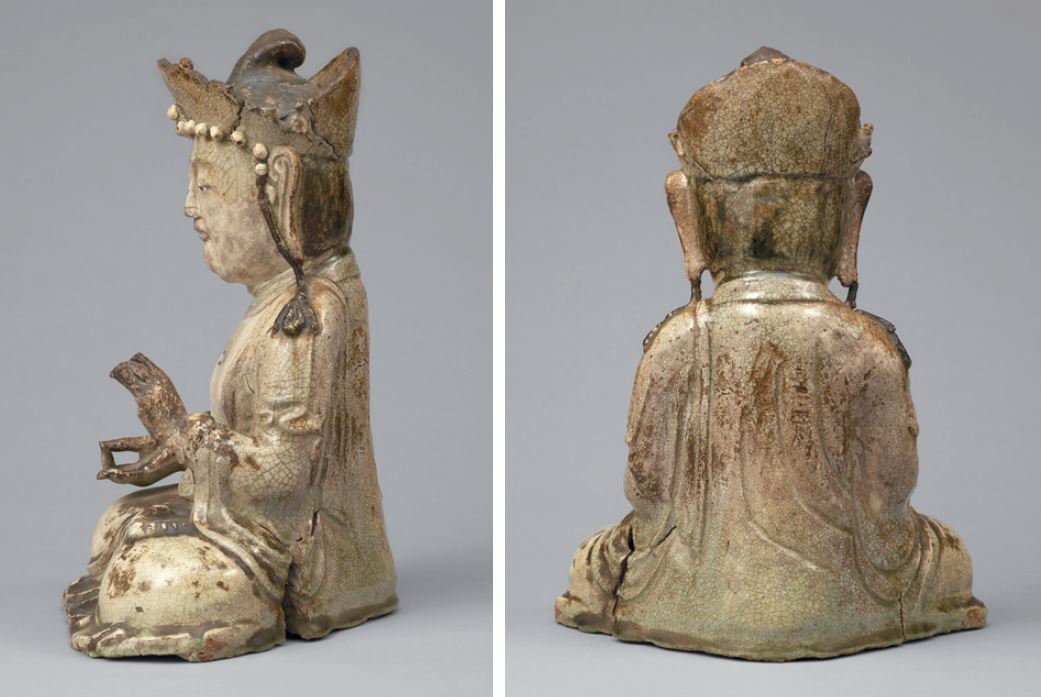