During envoy missions, members from both countries used painting to communicate and express their emotions. Generally, these types of paintings belonged to the categories of bird and flower painting, paintings of animals, paintings of the four gentleman and landscapes all of which were familiar to Korean and Japanese alike. Looking closely at Painting of an Oddly-shaped stone and orchid.  What kind of emotion do you think the artist was attempting to convey to his Japanese hosts?

Painting of an Oddly-shaped Stone and Orchid (石蘭圖)

Kim Yuseong produced this painting when he accompanied an envoy to Japan as a court painter in 1763. Throughout his trip, Kim actively engaged with Japanese scholars and intellectuals including the Southern-school painter Ikeno Taiga (池大雅, 1723-1776) and also gifted landscape paintings for the temple known as Seikenji (淸見寺).

In this work, Kim uses black ink to represent blooming orchids and butterflies hovering around an oddly-shaped stone. The painting also includes an inscription "Joseon Seoam (朝鮮西巖)" as well as a seal repeating the characters "Seoam (西巖)" in the bottom right. 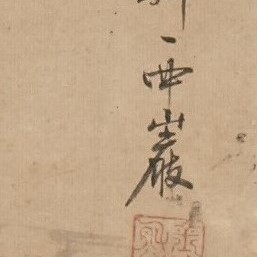 Let's take a look at other paintings related to this Joseon Envoy.

This painting of plum blossom was produced by the Joseon painter Byun Bak who was employed at the Naval Office of Dongnaebu (currently Busan). Byun was celebrated by writers and painters alike for his distinctive approach to painting plum blossoms. In Plum Blossoms, the artists highlights the contrast between an old twisted plum tree and a new straight branch that juts out from the trunk. A bamboo shoot grows out of the ground at the foot of the old plum tree. Inscriptions in the bottom left of the painting record how Byun Bak produced the painting during his trip with the envoy to Japan in 1764.

This painting was produced by the Joseon court painter Yi Uiyang during his travels with an envoy to Japan in 1811. In the painting, Lee uses subtle colors to represent human figures peacefully coexisting with the natural environment. A scholar in a small boat floats peacefully through surrounding rivers and hills and small villages are situated beneath the high mountains in the background. Deep within the forest, groups of scholars pass the time drinking alcohol or tea and a further scholar crosses over a bridge Hongyegyo (虹蜺橋) , trailed by his servant carrying a geomungo.