A waegwan (倭館) refers to a diplomatic compound where representatives from Joseon and Japan carried out trade and affairs of state.

The Choryang Waegwan, originally located in Dongnae (near the current city of Busan), was the fourth largest Joseon waegwan, after the Busanpo Waegwan founded in the early Joseon Dynasty, and the Jeolyeongdo Waegwan and Dumopo Waegwan that were constructed after the Imjin War. Unlike the other waegwan, the Choryang Waegwan included Japanese residences that housed close to five hundred Japanese nationals including envoys, officials and merchants. As such, it became a major center for cultural exchange where intellectuals from both countries gathered to discuss any number of topics from food to art production. Even after diplomatic relations were suspended in the late Eighteenth century, the Choryang waegwan continued to serve as an important hub for cultural exchange. In fact, Joseon artists were employed at the Waegwan to produce paintings for export to Japan where Korean paintings were in high demand.

The fact that one of the panels in Painting of the Magistrate of Dongnae welcoming the Japanese Envoys provides a detailed overview of the Choryang Waegwan, speaks to its important role in facilitating cultural exchange between Korea and Japan even during periods of political tension.

Painting of the Magistrate of Dongnae Welcoming the Japanese Envoys (東萊府使接倭使圖)

After the Japanese Invasion of Korea, Japanese envoys to Joseon were prohibited from entering the capital city of Hanyang and meeting the King in person. Instead, a diplomatic welcoming party was arranged at the Choryang Waegwan in Dongnae. This screen represents important moments from the welcoming ceremony chronologically across ten panels including the procession of the Dongnae Magistrate to greet the envoy, the Japanese envoy paying respect to the Joseon King through the symbol of the jeonpae*, and the banquet held at at Yeonhyang Daecheong. All of the scenes are depicted from an elevated perspective and contain historical details of key buildings and the surrounding region that provide a wealth of information about the Dongnae area at that time.

*Jeonpae (殿牌): A wooden plate that functions as a symbol for the king. Government officials were required to bow to the jeonpae to show their respect and loyalty.

Dongnae is located in the south-east region of Miryang. Due to this location, Dongnae is the first Korean territory you will encounter when travelling from the Wae (Japan).

Prior to the Imjin year, the Waegwan was established on the south coast of the village, and wooden fences were constructed to separate it from the surrounding villages.

Every year, the people of Daemado receive documents from their ruler and take hundreds of Wae people (Japanese) to stay in the  Waegwan.

Greeting the Japanese Envoy at the Busan Waegwan

This ten-fold screen represents a chronological series of scenes from the welcoming reception for the Japanese delegation at the Choryang Waegwan.

The selected scenes and composition closely resemble Painting of the Magistrate of Dongnae Welcoming the Japanese Envoys discussed previously but in this case, the major geographical features and buildings are identified by name. Judging by the style and composition, this screen was likely painted by a Joseon painter in the early twentieth century. It is currently housed in the National Museum of Tokyo, Japan.

This painting from the late Joseon Dynasty is a bird's-eye view of the Choryang Waegwan and the location of 56 administrative buildings. As shown in the painting, the Waegwan was divided into a West Section (Seogwan) and an East Section (Donggwan) around Yongdu mountain at the center. Buildings related to diplomacy, administration, daily life, and trade were confined to the east section, while the residences for the envoys from Japan were built in the west section. The precise location of important sites such as Choryang Gaeksa, where ritual ceremonies were performed, and Yeongyang Daecheong where feasts were held, are also recorded in the painting.

As previously mentioned, the painter Byun Park worked at the Dongnaebu Naval Office, where he was involved in painting production and participated in an envoy to Japan in 1763 (the 39th year of King Yeongjo's reign). 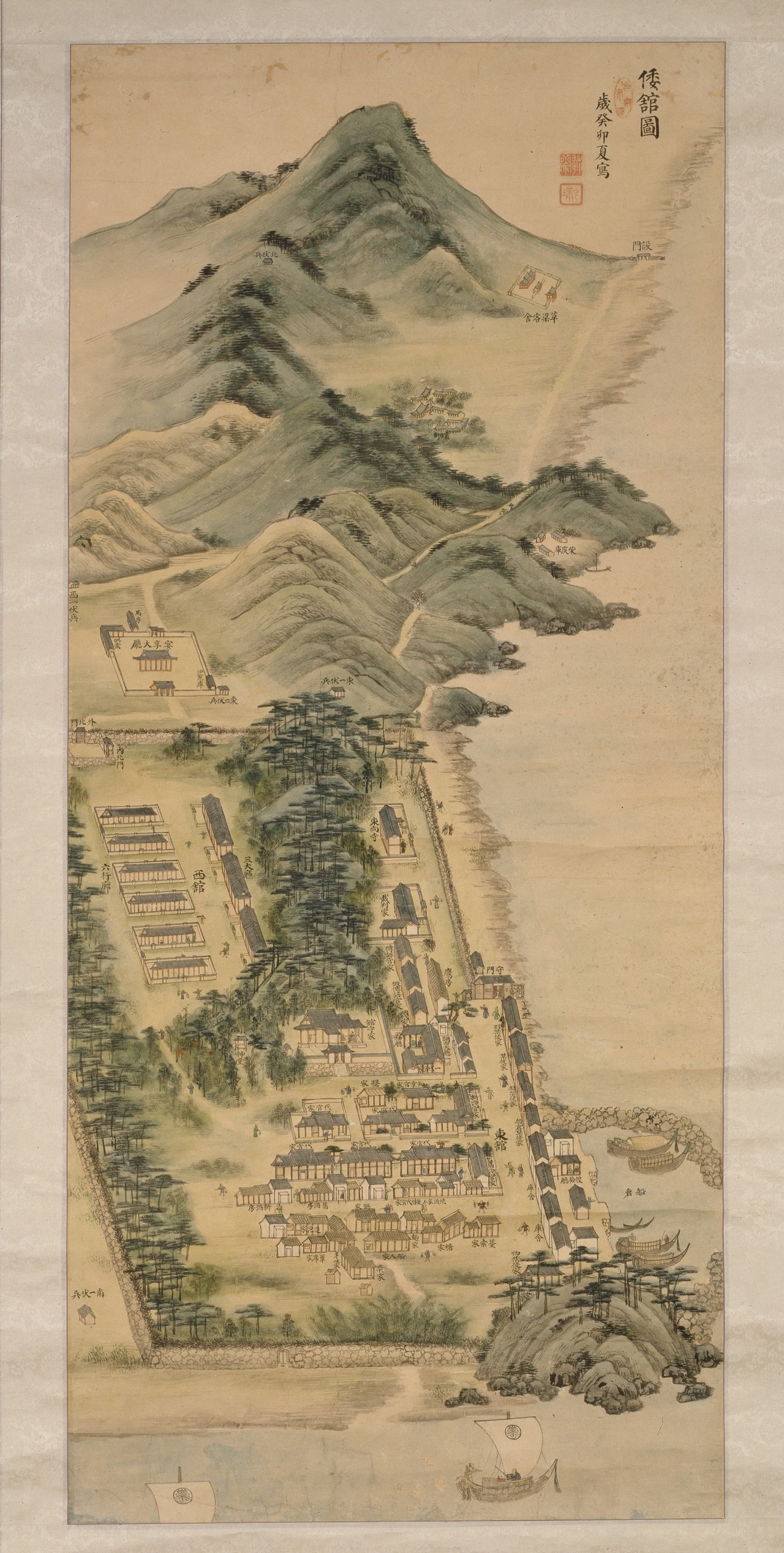 Click to see the paintings in detail
More
Short Cut